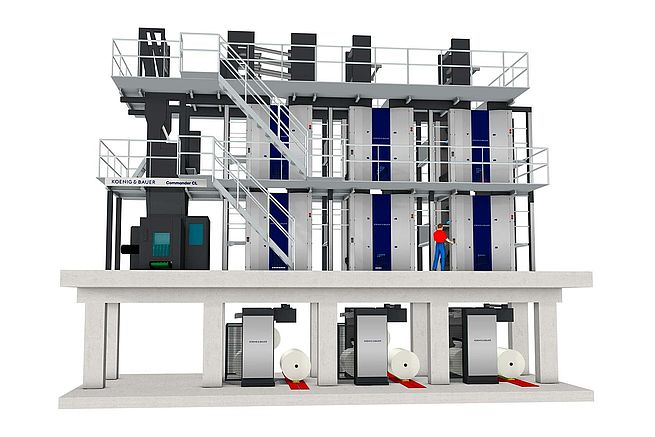 Swiss media house Somedia Partner AG is investing in a highly automated newspaper press from Koenig & Bauer. A Commander CL will be installed as replacement for a competitor’s press at the print centre in Haag in St. Gallen Rhine Valley and is scheduled to come on stream in summer next year.

The new press will then be used to print more than 120,000 daily and weekly newspapers every day. Urs Zieri, managing director of Somedia Partner AG: “We wanted to, and indeed needed to, invest in a new press. The discussions with Koenig & Bauer were straightforward and focussed on partnership from the very beginning. The overall package simply felt right. We are convinced that it was the right decision to go with Koenig & Bauer.”

Over the past years, European newspaper printers have frequently opted for presses from the highest performance class made by Koenig & Bauer. “Given the situation presented by general market developments, we are delighted to see that companies like Somedia Partner believe in print and are making investments. We are also very satisfied with the level of orders we have received for newspaper presses. Further projects are in the pipeline and decisions are expected soon. Above all, the products currently in high demand when making new investments are flexible, practice-oriented and automated presses, and we have an outstanding image in this respect with our trio represented by the Commander CL, Commander CT and Cortina,” says Stefan Segger, sales director at Koenig & Bauer Digital & Webfed.

Somedia Partner AG comprises three independent publishing companies: Somedia AG, Sarganserländer Druck AG and Vaduzer Medienhaus AG. Together, they produce eight regional daily titles, including the Südostschweiz, the Sarganserländer and the Liechtensteiner Vaterland. At the weekend, the almost 50 employees at the Somedia Partner print centre in Haag also produce two weeklies, the Liewo and the Schweiz am Wochenende.